This is an actual Net Energy Metering (NEM) TNB bill for January 2020 given by one of our clients:

First, let’s take a look at the amount of electricity imported from TNB

There was 654 kWh imported from TNB, where tariffs reached up to tier 4 (or RM 0.546 per kWh). Total price for electricity imported is RM 261.28. However, this amount could have been higher — because with NEM scheme, the property will consume electricity from solar power first, with any excess solar power then exported to TNB. Therefore, during the day when generating solar power, there will be less or no electricity imported from TNB. This amount consumed directly from solar power is not reflected in the TNB bill, but can be tracked with an additional smart meter installed, or by a simple calculation which will be shown below.

But before that, let’s take a look at the amount of electricity exported to TNB:

There was as much as 332 kWh exported to TNB. As stipulated in the NEM scheme, electricity exported to the grid will be sold at a 1-to-1 basis. In other words, you sell electricity for the same price you buy them for. For this case, tariffs reached up to tier 4, so selling price starts at RM 0.546 for 54 kWh, followed by RM 0.516 for 278 kWh. In total, RM 172.93 worth of electricity has been sold to TNB.

Now, let’s take a look at the summary table:

Subsequently, let’s attempt to determine the amount of electricity consumed directly from solar power, by taking a look at the solar inverter’s monitoring system:

If you have any questions regarding this article, or would like to find out more, our representatives will be glad to assist you. Simply get in touch with us here, to also receive a complimentary power study and 3D drone survey of your property.

Can You Do Solar Panel Installation on Own?

Plan Ahead with Solar Investment Calculator 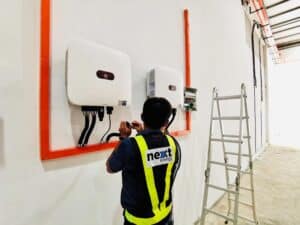 There are many solar inverter brands offered by solar panel contractors in Malaysia. Oftentimes, the 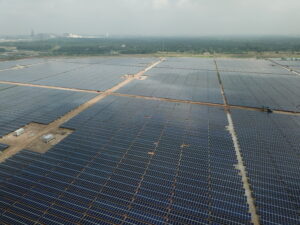 All You Need to Know About Large Scale Solar in Malaysia